Even while the hopelessly dishonest, scientifically illiterate oldstream media continues lying to the public with the ridiculous narrative that “vaccines are safe” — read WashPost, The Atlantic, NYT or USA Today for a daily dose of vaccine holocaust denialism — the federal government has publicly released vaccine injury payout figures that prove vaccines routinely maim and kill children all across America.

The government’s own document, found at this link, reveals statistics of over 18,000 petitions filed for compensation by families of children who were seriously injured, maimed or killed by vaccines in the United States alone.

A backup copy of the document has also been posted Natural News, in case the government attempts to “memory hole” the report:

The document reveals that a shocking 633 petitions for serious vaccine injury or death have been filed in fiscal year 2017. This follows 1,120 petitions that were filed in 2016.

The number of petitions filed is a tiny fraction of the total number of children who are seriously harmed by vaccine injuries, as doctors aggressively brainwash parents into believing that seizures, convulsions, autism and other serious conditions are never caused by vaccines. Furthermore, families of vaccine-injured children must hire an attorney to file a petition with the U.S. government, then wait anywhere from two to ten years for a decision by a “kangaroo court” that’s stacked against them. Thus, in nearly all cases of vaccine injury, parents are convinced into either believing that vaccines had nothing to do with the injury or that trying to fight the government for compensation is a complete waste of time. (This is all by design.)

As a result, the real number of vaccine-injured children in America is at least 100 times larger, and more reasonably as much as 1000 times larger when you consider “minor” brain damage, short-term seizures and other conditions that are difficult for parents to notice. 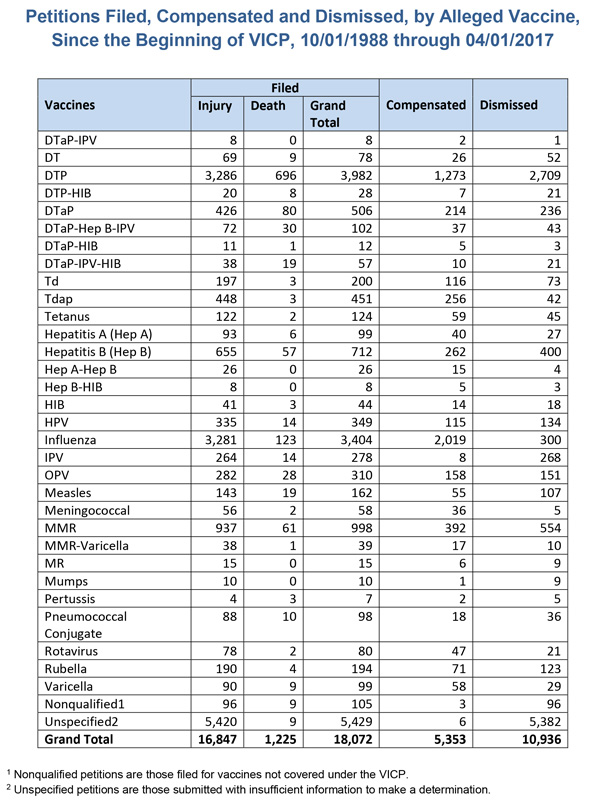 As reported by Waking Times:

Yet another shocking blow has been delivered to people who still ardently claim that vaccines are “safe and effective,” and that the only complications they can cause are “mild.” The US government department for Health Resources and Services Administration has recently released the running tally of the just-past-half-way-complete US Fiscal Year (FY) of 2017 for compensable vaccine injuries. It currently stands at over $142 million dollars. You read that right. That covers the 377 cases that were thus far successful in obtaining compensation in fiscal year 2017 through the heavily biased (to put it politely) system allegedly in place to redress damage done by vaccines in the USA.

At the rate things are going, we might expect the Vaccine Injury Compensation Program to pay out around $220 million or more by the close of FY 2017. To clarify, US Fiscal Year 2017 runs from October 1st, 2016 to September 30th, 2017 – there’s still over four months remaining to rack up more carnage.

According to the CDC’s website, there are “limitations in our knowledge of the risks associated with vaccines” and vaccinations have “the following problems”:

The above very revealing admissions from the US Centers for Disease Control (CDC) completely undercut the pathological overconfidence exhibited in the extreme portions of the community pushing for mandatory vaccination.

To date, the U.S. government has now paid out nearly $3.6 billion in vaccine injury compensation, absolutely shredding the lies of the fake news media outlets (The Atlantic, CNN, WashPost, NYT, etc.) which continue to stupidly claim that vaccines harm no one. (Are all their science and medicine reporters vaccine damaged themselves?)

Follow more news on the CDC’s vaccine zealotry at CDC.news, or stay informed about vaccine injuries and deaths at Vaccines.news.